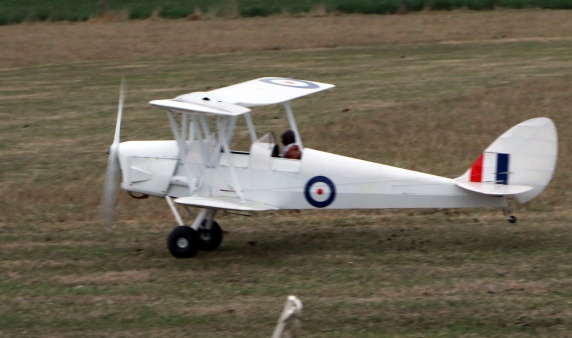 A disappointing morning. Forecast for rain later in the day, barely had we parked at 9:30 am when the rain came.  Just time for Roger to assemble his large Tiger Moth and essay a maiden flight – it flew perfectly. Steve, still on the road, saw the model turn on finals and was convinced that we were being visited by a full-size Moth.  The rain then forced a retreat.

Another day our of the box.  I really will have to think about charging for arranging this kind of weather!

Not a prang, just maintenance…

Engines on tune, Peter does the ground tests and steels himself for the launch – but not to be.  He decided that torque swing on take-off demanded more available rudder and to cap it, a drooping flap. Inspection revealed a faulty clevis. Weather has been arranged for next Sunday.

A surprise after a Saturday of heavy rain, the paddock seemed to have soaked it up and the skies were blue, with light easterlies. 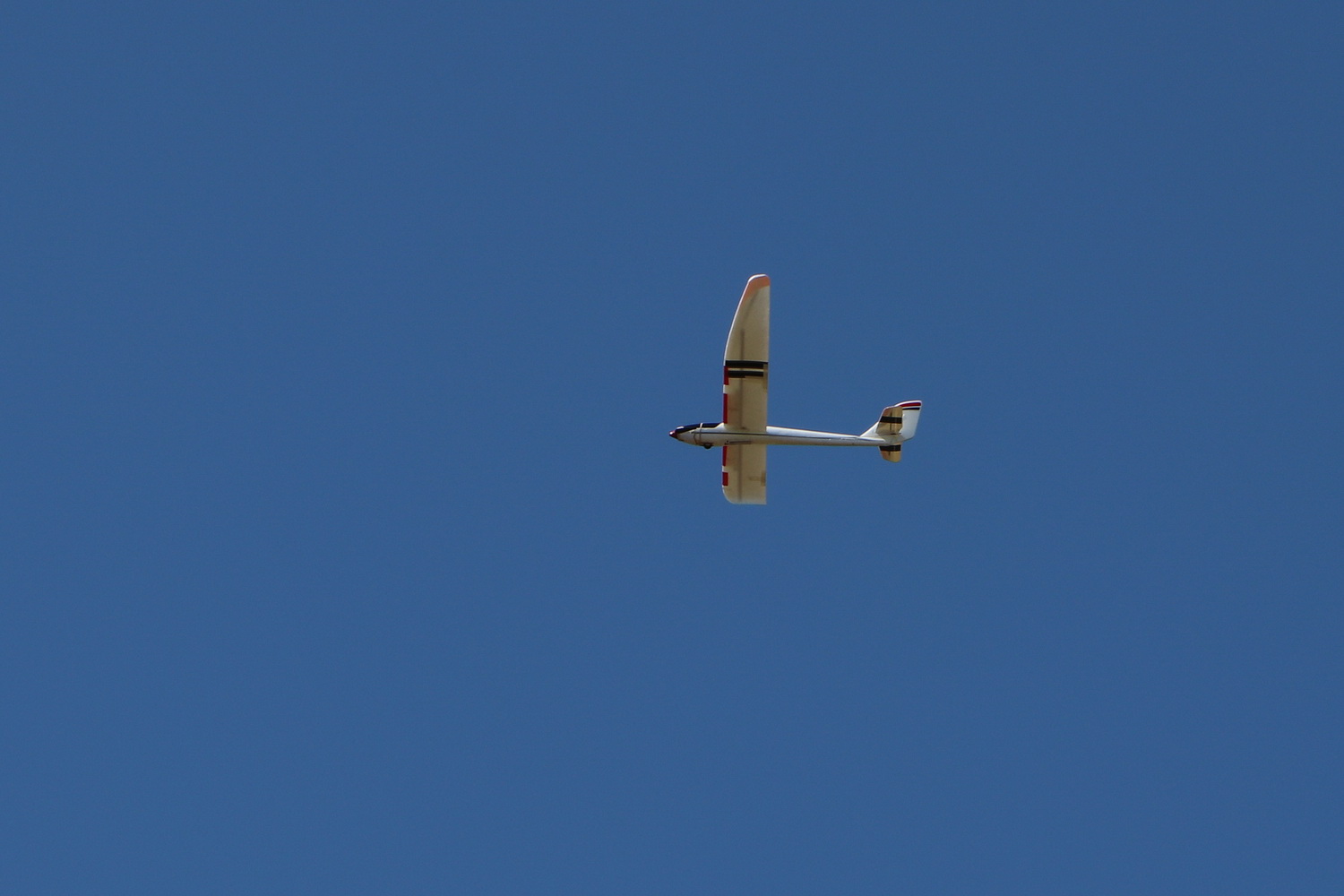 It came from outer space!

We have all heard the stories of exploding lipo batteries and fires. We resolve to ensure that batteries are charged using the correct settings and in a safe location. Nonetheless, it is easy to believe that it cannot happen to me.

One member arrived at the field today to relate a cautionary tale. He set up a battery to charge on a bench in his garage and left to attend to some other work in the house. Returning to check, he was confronted with what appeared to be a mist but on cautiously opening the garage door found the interior in flames. He grabbed a hosepipe, soon to be joined by his neighbour with a hose, and they successfully extinguished the blaze.

But, examination of the interior revealed that every model aircraft that he owned had been destroyed together with tools and other items stored in the garage. He believes that the garage is repairable but that the entire roof will need to be replaced. Fortunately, he has insurance.

A very hot morning with a light easterly breeze.  Mid morning a black a threatening  sky moved in from the west and Jeff reported strong lift all round.

Dave announced that almost immediately he and Kathie are shifting to Mosgeil to be near family and that today was likely to be his last Sunday morning visit to the RPMAC field.  Farewell and good wishes all round.

Downsizing, Dave produced a couple of 2 metre Radians free for the taking. Jeff and Bill took one each. 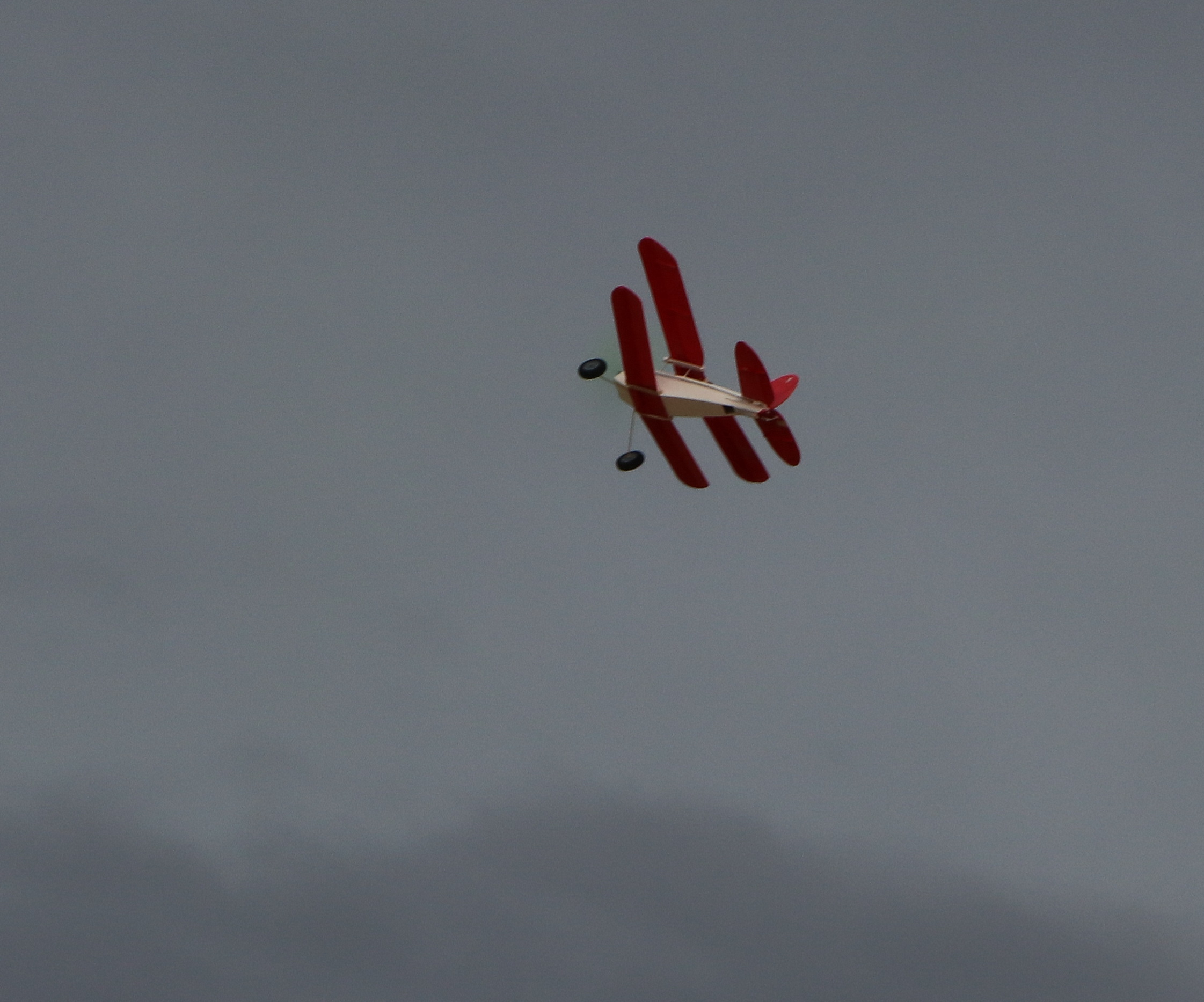 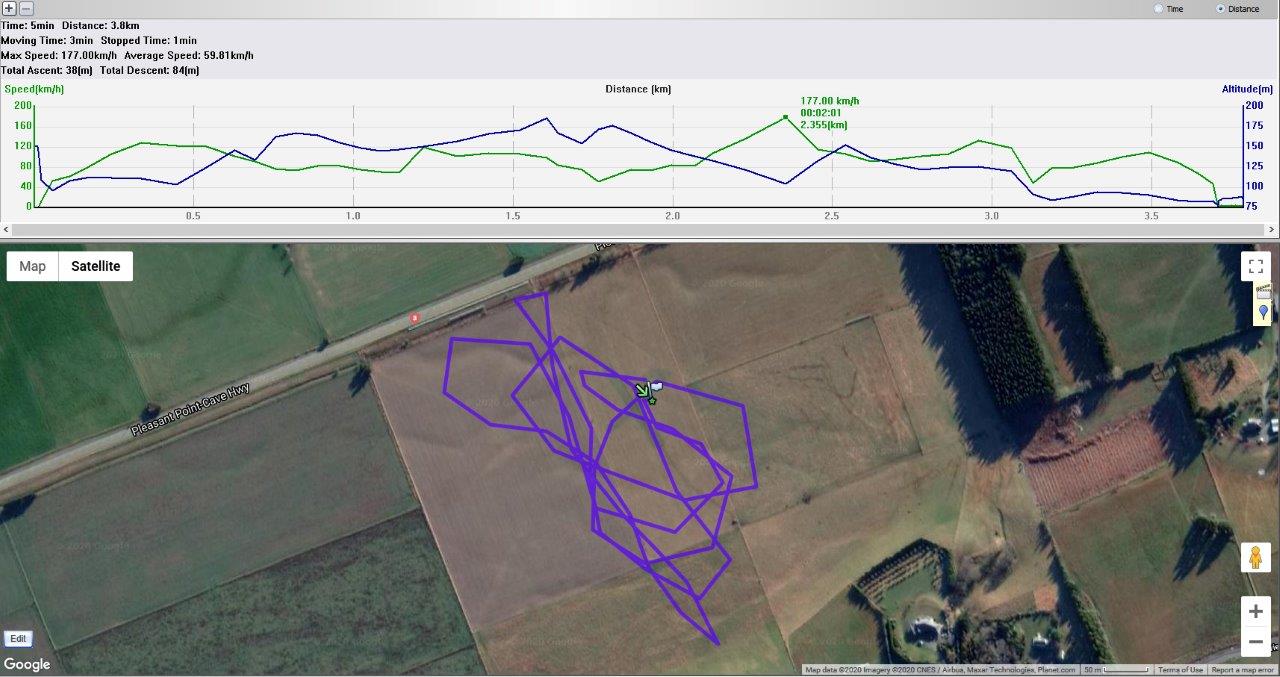 John added a GPS Tracker to his Sportster model which produced the image above. Unbelievably, at one point the model reached 177 km/h. Nonetheless, John has been admonished and instructed to practice until all his circuits achieve a perfect elliptical track.

Another “out of the box” – cloudless with a light easterly…

The roar of the mighty Merlin…

A beautiful morning with a light easterly. 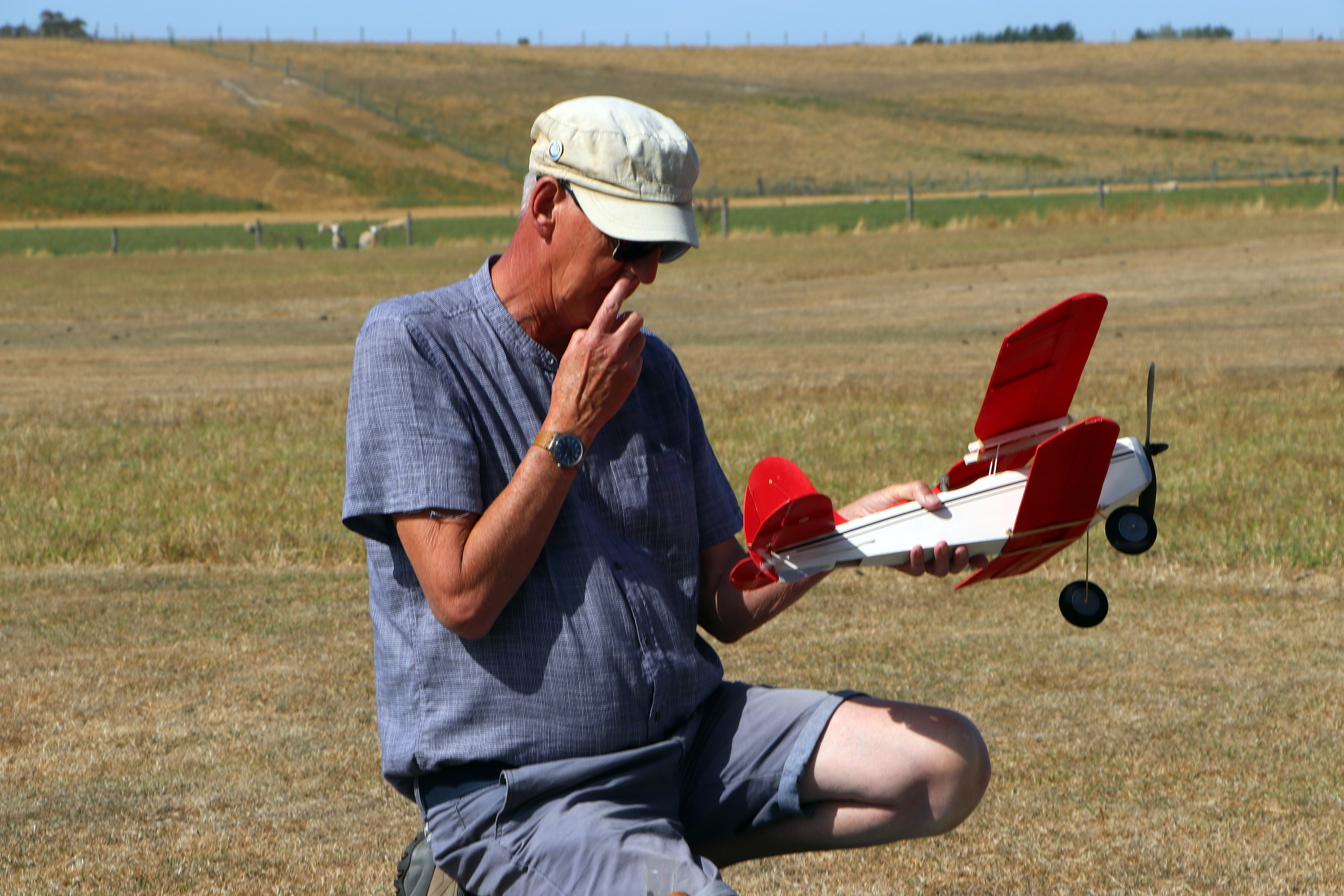 Another whimsical creation by Richard and it flies well. 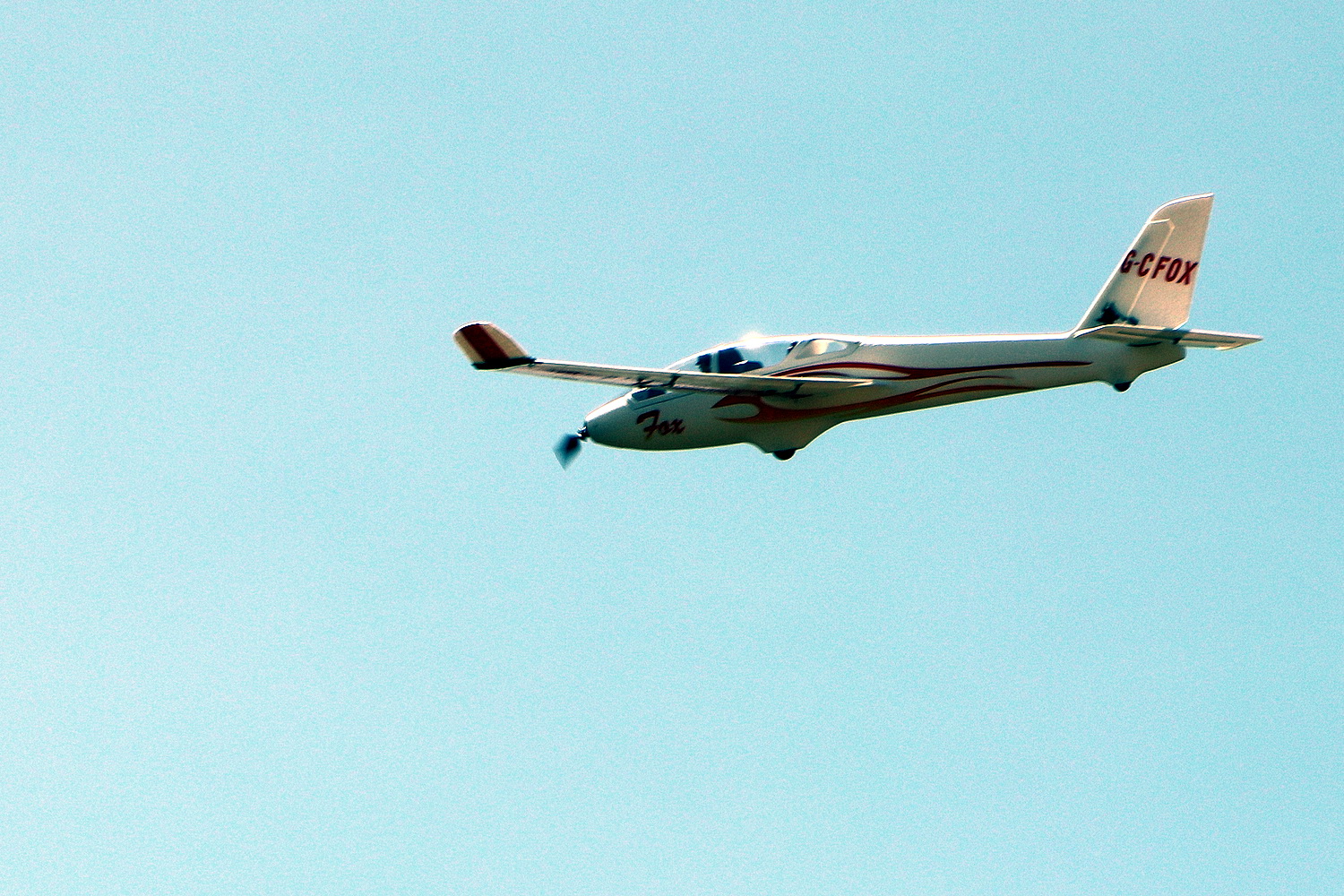 Why not fly in comfort, but do try to stay awake.  Dave made a 30 minute sortie and found some rising air. 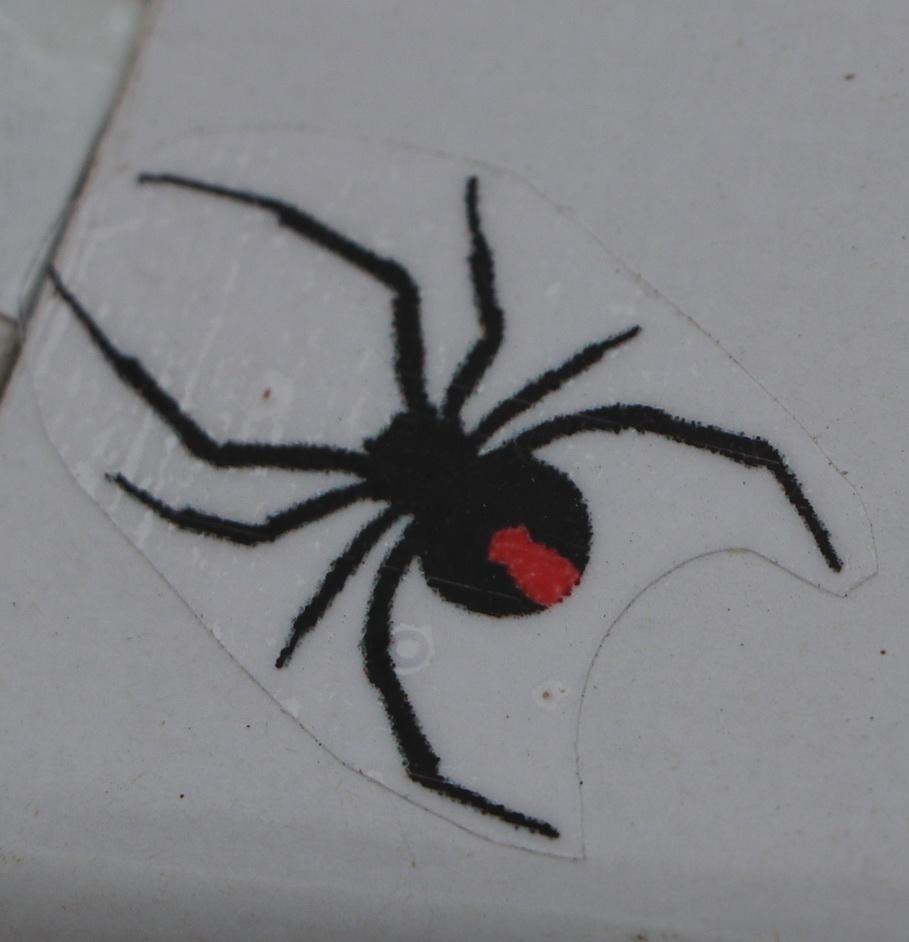 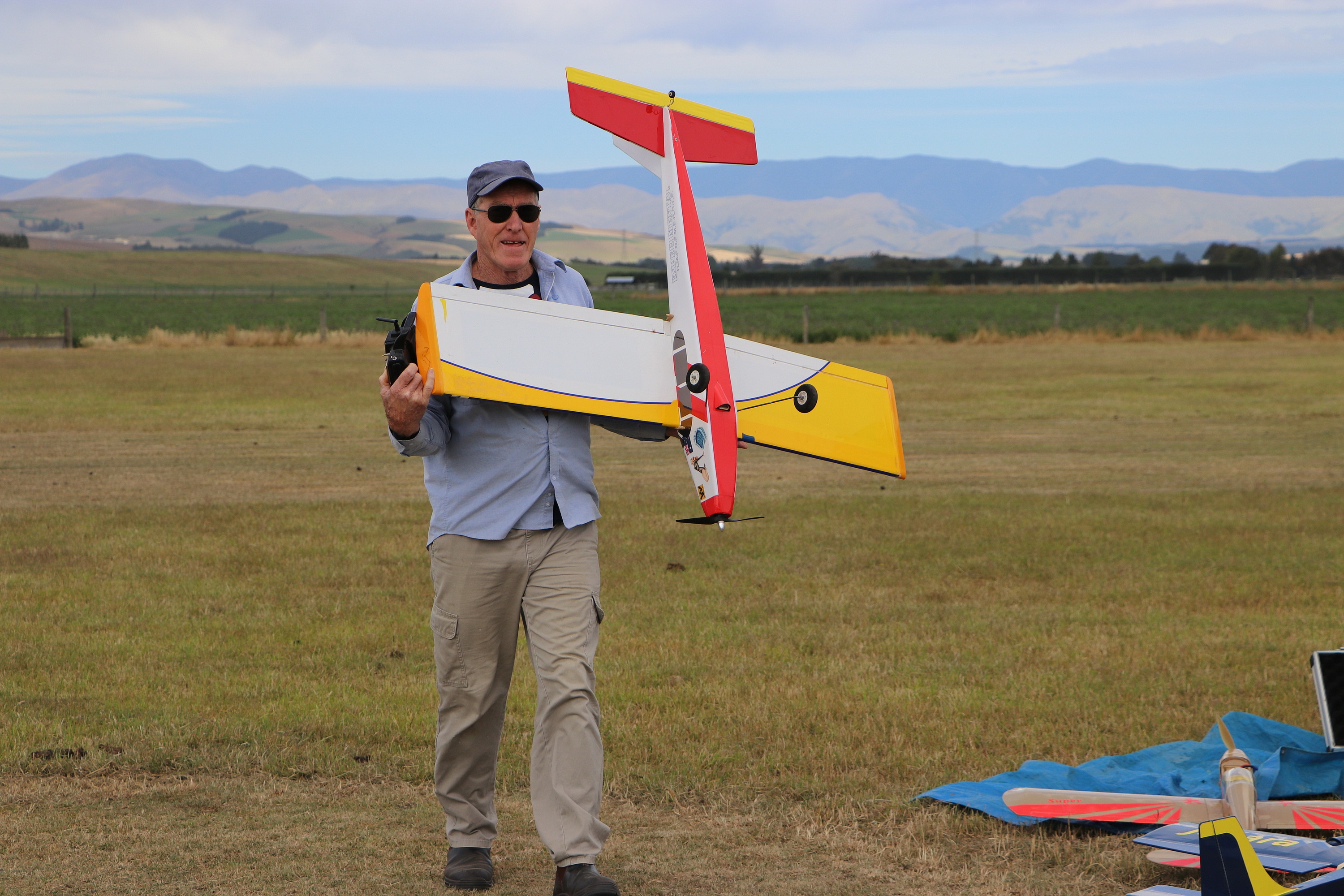 Keep it out of the sun Jeff…

The more the merrier…

After contact with grass at the edge of the strip – is the main spar intact or not?

After a changeable week, Sunday turned on a day just made for model flying.

Then he reverts to his day job with Delta Airlines.

Wow! The centre of attention…

The Dakota had given Peter trouble from the moment it was extracted from it’s packaging. He recalled that he had many times been on the point of hanging it from the ceiling of his workshop. But for all that, it flew well. The first few minutes of today’s sortie appeared to be normal, but then disaster struck. The left engine shutdown with the right stuck on full throttle, the machine became uncontrollable. Pete made a valiant effort to return to the strip, but it was not to be…

Today the temperature peaked at 29 degrees and left everyone gasping, but it was beautiful almost windless day.  Dave and Don tried for some slope lift along the ridge to the south but the results were not clear.

Don runs up and adjusts his motor.

A willing helper as Dave trims out his Fox.

Although it flies beautifully, the DC3 continues to give trouble.  Last week the port side engine mount broke on start-up and today the throttle ceased to function. Full marks to Peter for persistence.

Richard repaired the Georgia Cracker and it performed perfectly, smooth and accurate.

John flew the recently refurbished ex-Dave, and if performed as good as it looks.

A hive of activity. Snow lingers on the distant hills, but the days are warming.

Steve prepares his Calmato for another aerobatic flight.

Roger’s latest acquistion, a large Cub, predictably flew like a bought one.  Richard had a spot of trouble with his latest scratch-built model.

But the old vintage job continues to perform well.

Peter’s sport model is ace at aerobatics, but this low pass was too low – he wiped the undercarriage.

Peter has been struggling with the DC3 for months and asserts that it is the most disappointing kit that he has ever encountered. On completing the assembly he found balance to be a problem and to get the C of G to the optimum position necessitated 2lbs of lead in the nose! But it flew sedately.

Roger assembles a recent acquisition which is powered by a petrol engine.  Predictably the Chipmunk is elegant in flight.  Another awaits it’s maiden in the van.

Peter maidens a recent acquisition by the Collins brothers

Peter test flew Richard’s impressive new Mustang which proved to be a winner.  Richard took control and the model flew as if on rails.

Dave (right) preps his sport model which ended in a tangled heap immediately on take-off.  Much head-scratching, but Dave believes that a switching problem on the transmitter the most probable cause. Kathy supervises.

A strange morning, starting with fog resulting in solid overcast at about 400 feet.  Several members flew and skimmed the bottom of the clouds.  Others concluded that discretion is…

Richard’s scratch built WW1 Italian Alexandro the subject of scrutiny, will it or won’t it? It did, but balance problems meant that it flew rather edgely.

It was hot, too hot for comfort but certain gentlemen solved the problem — 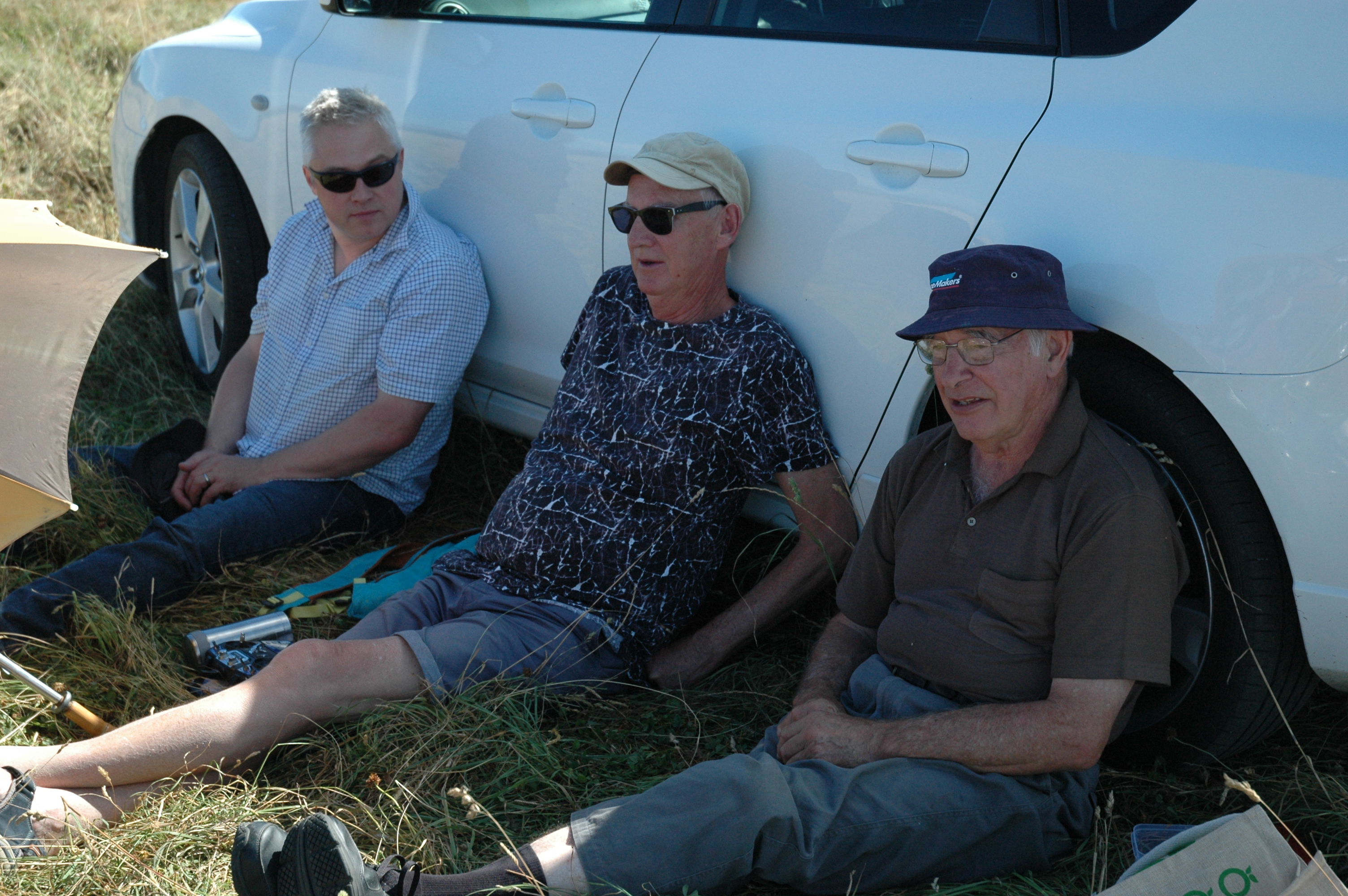 A beautiful morning with some spectacular cloud formations threatening wind, but it remained calm. 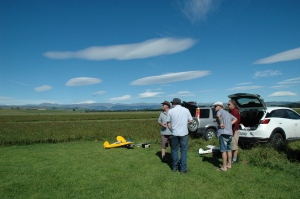 Later, club members enjoyed a barbecue at the home of Dave and Kathy. Not the first such occasion, but certainly a rare event. 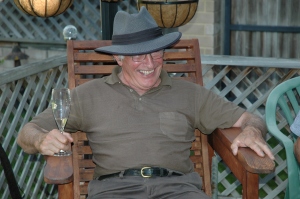 Dull and windy and only the brave or foolhardy diced with the elements.  Steve (background) and his Calmato were made for these conditions and he was untroubled.  Don chanced his luck with his light little bipe to be rewarded with a spectacular mid-air breakup. The rest wisely remained grounded.

An ominous overcast, black storm clouds all around with evident rainfall over the foothills. But, at the strip it was dry with little wind. However, it proved to be a smashing day. First a battery failure at about hundred feet had Rogers sport model nose dive to the ground under power to become a write off.

Then, Bill essayed a flight with his Super Tundra. All was well for about ten minutes when he set up for a landing and seconds before touchdown the model became uncontrollable, cart-wheeled and smashed off the forward section of the fuselage. It happened so quickly that it was not possible to assign a cause. 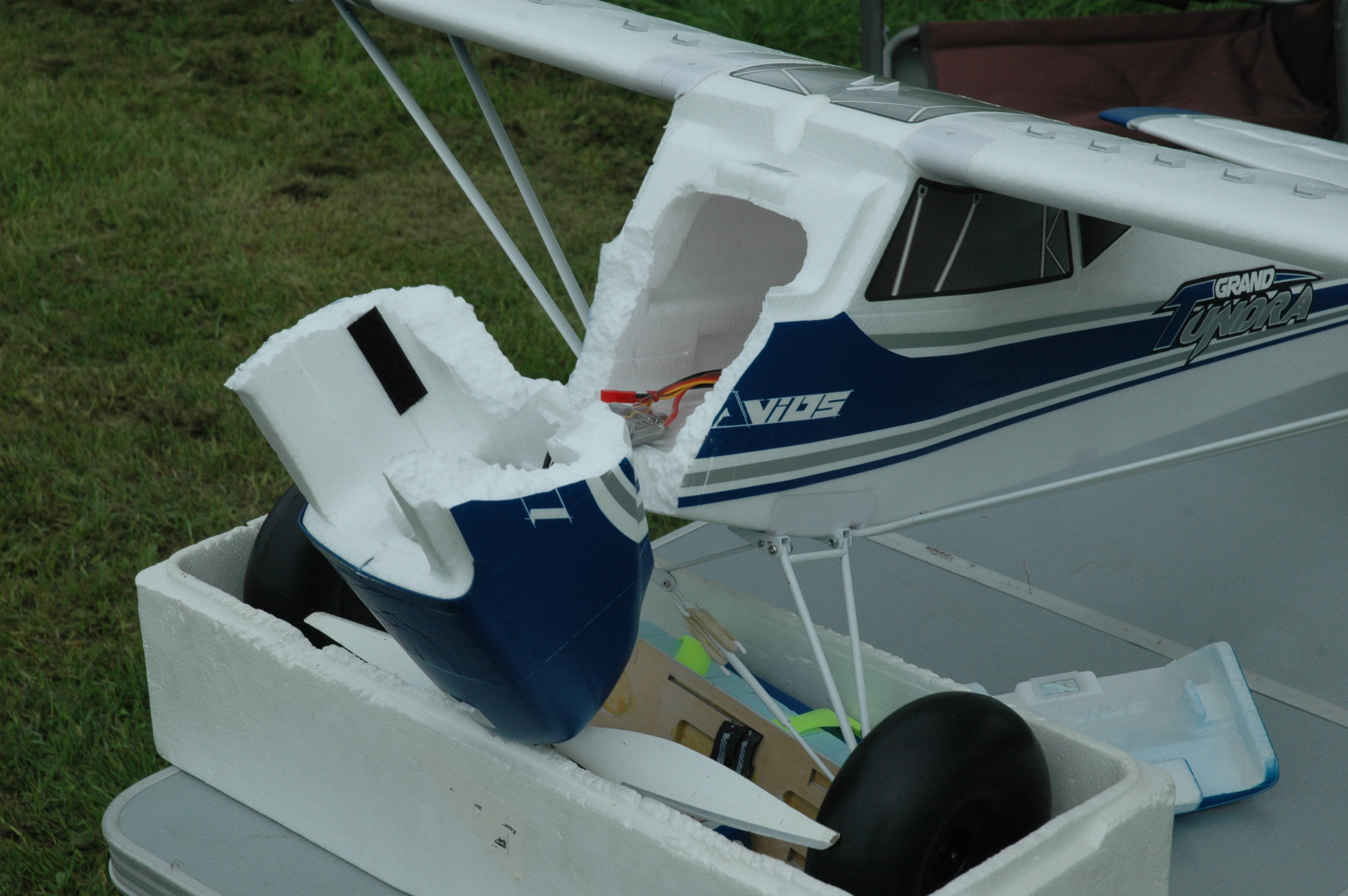 Geoff continues to progress and had successful flights with both his models.

A fine, calm morning with half a dozen members present.  Richard relaunched and flew his pterodactyloid after rebuilding the wings and eliminating the warp.  It proved a little touchy in flight 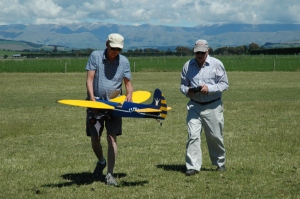 Bill rigidly secured the heavy 6S battery in the correct CoG position in his Grand Tundra and opined that it would take an earthquake to shift it! It proved to be more docile then expected and infinitely versatile.

This week, Steve forsook the Stick and essayed several flights with his latest acquisition the Calmato which flew like a bought one, smooth, precise and aerobatic.

True to the forecast, Sunday morning produced a north-west gale which left three members flying the ride on mower. With no signs of any early abatement members present gave up and left

A good attendence for a holiday weekend.

Bill reveals his latest. It flew but proved to be a powerful handful and restraining the battery to the CoG position proved to be an issue – back to the bench…

With the guidance of Don, Jeff persists and is well on the way to becoming a competent RC pilot.

Once again, the forecast was wrong and we enjoyed a pleasant morning. Dave and Bill had a spot of glider guiding and Jeff persists in mastering his foamie. Dave exhibited his latest acquisition, a beautiful Cherokee.

The first news post on the new website. Once again, the weather forecaster missed the target. What was slated to be a calm, sunny day remained overcast and chilly until early afternoon. Nonetheless, half a dozen members braved the elements and enjoyed flying in the calm conditions. The grey overcast made it a little difficult to observe the planes in flight. Peter left the Monster at home and put on a show with his sport aerobat. Steve put his corflute stick through its paces and mentioned that he was thinking about learning the regulation aerobatic routine. Bill lost power on his Storch and made a scrappy arrival, broke the prop.